Remember my failed attempt at the dating rule of three when I thought I might be juggling three men at the same time? I had a similar experience that began last weekend. As the week progressed, three was reduced to two, then one, and now zero.

Join me in a bowl of Spring Pasta Salad while I share my subtraction problem.

Mr. M: Nine years my junior, 1.5 inches taller than me (later you’ll see why I bring this up), a self described INTP.

I spent the most time communicating with Mr. M. After I “liked” him on Match, he wrote a confusing message that had me wondering whether he was interested. I pondered whether to reply and decided to write back with a touch of humor.

Mr. M rounded up his height, he wrote, because he “grew tired of women automatically subtracting 2” from my height when I truncated the fraction and listed 5’11” (apparently, a lot of guys in the 5’8” to 5’9” range list 5’11” as their height on dating sites). That no longer happens at 6’0”. You are tall woman. You need a man who is at least 6’0”.

It turned out he was interested and said he thought the difference in our ages (not his height) might be a problem for me (Nonsensical since I sent him a “like.”) He wrote a couple of complementary messages and then we explored our mutual interests including music, being active, and travel.

All seemed promising until he turned my question about how long he had been divorced into an excuse to mansplain his views on today’s dating world, human behavior and physiology.

As part of his cave man soliloquy he made a comment that I didn’t care for about women who fall outside of his “normal parameters.”

He went on and on and on about man’s primal urge to pursue, men’s average height in the US, female preference for tall men even if the women are relatively short and “woman’s basic primal need to feel safe and secure.” In between the mansplaining, a little insecurity disguised as bravado appeared: 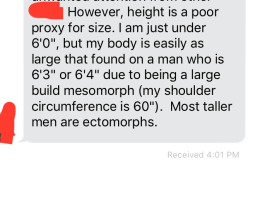 I was getting more and more annoyed. His messages were long and instead of getting to know me he was standing on a soapbox, actually trying to stand taller on a soapbox.

I tried to shake him out of his pontification mode with a mildly sarcastic comment and a suggestion that it was “too depressing to think about dating in terms of statistics.” He ignored my comments and barreled through. I just stopped responding to him.

Almost two days later, for closure’s sake, I messaged him that I felt like I was being lectured to rather than participating in a conversation. I also let him know that being considered “outside of normal parameters” (his way of describing our age difference) didn’t feel good to me. No response, which was fine. I was done.

Mr. J, the journalist or should I say the reticent journalist, was the second to fall. Despite a life of words, he was the opposite of Mr. M in his correspondence style. He was brief – perhaps too brief – and to the point. We only exchanged a few messages – about a novel he was reading that I had started. I pushed for him to post some additional pictures. He only had one of his head (not even shoulders were visible) and his other photo was of his dog.

Mr. J acknowledged he should add more pictures and two days later he messaged me that he had loaded three photos taken that day. Sadly his photos were disappointing, making his initial more flattering picture look like an aberration. I couldn’t see myself with him.

It’s always awkward when you ask someone to post more photos and then if he does you find that you are not attracted to him. My tenderhearted nurse daughter said, “Oh, he looks like my patients.” “This is sad,” she said, “I couldn’t do online dating.”

I felt bad but knew I had to at least acknowledge Mr. J’s effort. I wrote to him and thanked him for posting but didn’t add any further comments or questions. I’m sure it was clear to him that I wasn’t interested and we’ve had no further communication.

I matched with Mr. R on both Plenty of Fish and Tinder. At first I hesitated to say yes to him – with interests in music and a business in remodeling homes, he had some similarities to my ex. Overall he was different enough — and appealing enough — to convince me to go forward. Mr. R asked me out on POF but then on Tinder he worried about the distance between us. He asked me for my view and whether I thought he was being shallow or realistic.

I wrote back that I thought long distance relationships (if an hour qualifies) could work but it depended on one’s desire to get to know a particular person and the individual circumstances of available time and energy. I said that I’d like to meet him and asked him to let me know if the distance would be too much of a negative for him.

Mr. R thanked me for my response and said he would think about it. That was last Thursday and I haven’t heard from him since. He’s been on POF and I assume he’s moved on. It’s possible Mr. R could still reach out and zero might become one…but I’m doubtful since there are plenty of female fish closer to him.

That’s the story of three to none. App-less April is here just in time.

Remember the line in Broadcast News when a news anchor yells, “I’m mad as hell and I’m not going to take it anymore?”

It’s time, ladies, to start “not taking” men’s bad online dating behavior anymore. During this activist time, let’s bond and call men out when they deserve it. And my male readers, I urge you to do the same for the women who exhibit bad manners.

Let’s do this with control and politeness – there’s enough ugly commenting happening online already. But let’s make our points. Our goal: To change the Tinderverse (and other dating worlds) one exchange at a time.

Yes, in fact this is my super power. Call me Annoyed Woman.

Annoyed Woman still likes to cook. Try this crispy tofu from the kitchn, a recipe inspired by my recent cooking class. Serve with a dipping sauce of your choice or incorporate into a stir-fry or pad Thai.

The last time I was on the receiving end of bad behavior, I wrote the following response. I didn’t send it and it’s too long but, next time I will pen an appropriate length communication and send it out to the offender. “This is how we can start to turn things around,” she said optimistically.

Imagine for a minute that we met at a party and started chatting. We talked for an hour and a half exploring 19 different questions and issues. And let’s suppose that I made a comment and asked the 20th question of the evening…and then you just walked away. Not a polite- “Well, I think I’ll get a drink” or “I see someone I know, it’s been nice talking to you.”  Or “Sorry I’ve got to make a call but can I get your number?”

None of that, you just walked away.  Hard to imagine doing that in “real life,” isn’t it? You’d be a real jerk if you behaved that way.

And here is the challenge and the problem with a virtual conversation. It’s still a conversation. You assume that because you’re not standing in front of someone, there’s no accountability or responsibility.

But when you act like the other party doesn’t really exist, that she has no feelings, you dehumanize what could be a real connection. By not saying “Nice chatting with you. Take care,” you have ruined an opportunity for grace and either continuance or closure. And you are now primed to continue acting this way in other dating encounters, whether it’s breadcrumbing or ghosting or any of the myriad modern dating actions which are really new words for the same old bad behaviors.

What do you think (other than the length)? It starts with you ladies. Let’s do this.

As you know, I like to leave you with a laugh…so let’s enjoy some crazy messages and profiles (and one clever one) from my dating files: 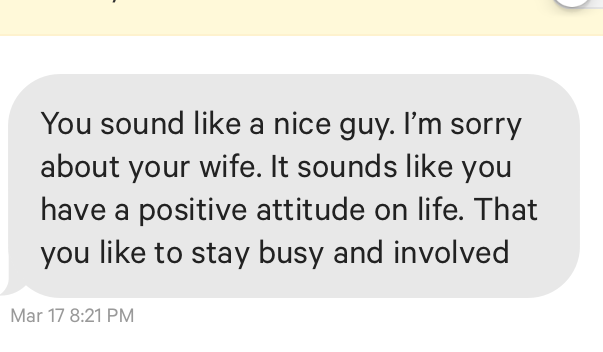 I guess I’m a nice guy….Not sure how/why I got this message! 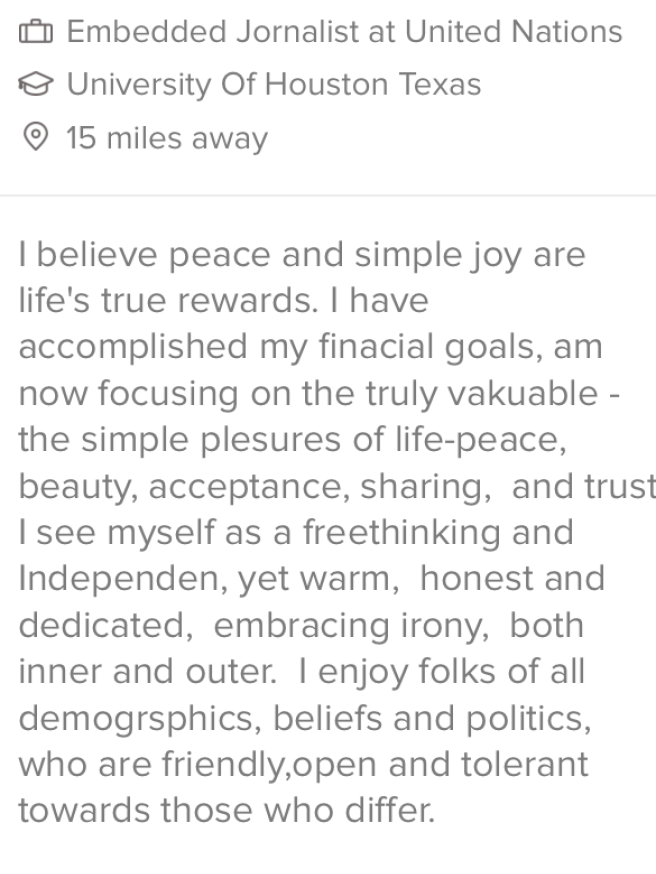 Likely a fake profile but regardless this embedded “jornalist” needs to embed in a good proofreading book.