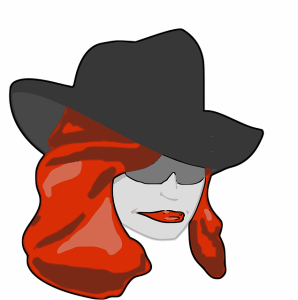 Although I frequently encounter online dating scammers via email, I finally had the “pleasure” of speaking to one on the phone.

Mr. O was my first “match” or connection on Coffee Meets Bagel, a dating app I recently downloaded to my phone (for a review of other apps, see Dating Sites and Apps: A Rodeo Roundup). For those unfamiliar with this free app, it provides daters with a section for a brief profile and photo and sends you a daily match or “bagel” at noon, provided the bakers or rather matchmakers in charge find someone for you. If there are no quality bagel matches, CMB may send you some “also rans.” You can take these imperfect matches or give them away to your friends. Unfortunately, there are no options to search on your own.

From our first exchange, I was a bit suspicious of Mr. O but I found his profile and photos appealing. I decided to play along safely for a while to confirm my suspicions – or not – and flex my investigative muscles. I hoped I would be proven wrong and that Mr. O was the real deal.

Let’s have some vegetable torte while I tell you this tale.

The Mr. O interlude was a slow unveiling of some odd, unusual or inconsistent “facts” that one/I could easily overlook in a search for romance.

Mr. O wrote he was Hungarian and noted that people had a hard time understanding him in conversation because of his accent. When I was confused about something he wrote, he asked me to remember that English is not his first language. Of course, that’s a ready-made excuse to explain inconsistencies.

Here’s a quick round up of other troubling details, provided for your learning pleasure.

“There is nothing finer than a woman who looks good in a pair of jeans and a T-shirt and can still dress up for a formal party when the occasion calls for it.”

Before our phone conversation, I dutifully searched Mr. O’s email address and cell phone number as well as unique sections of his profile on Google and romancescam. I searched his phone number on a security ID site. I wanted to search his photos on Google image search and TinEye. However, since there is no online version of Coffee Meets Bagel, I couldn’t save his photos from a web site. So I used my iPad to take a photo of Mr. O’s profile photo on my phone and then cropped it in iPhoto – creating a searchable jpeg file. Still nothing.

During our second phone call, however, I noticed Mr. O’s Hungarian accent periodically drifting into an African one. (Quick aside: if you ever want to identify an accent, check out this website with recordings — http://www.dialectsarchive.com.)

The accent shifting fueled my determination. I had to out him. I went back to romance scam and searched several unique sentences in the emails he sent me. One of the excerpts was a match. Mr. O was a known scammer.

A eureka moment like this is more sad and frustrating than joyful. Even when you’re suspicious of someone, your heart can start to engage.

It took awhile but I’m finally an experienced dater. So here are the dichotomies. I am not only more aware of and able to detect falseness but I’m also more vulnerable. I may have a discerning eye but I’m also tired of the game and willing to overlook some details.

Scamming aside, I am more likely to consider someone who at first glance might not seem like a match. I wonder if there’s a potentially good book underneath that used, slightly tattered cover. But I’ll also make damned sure that the book isn’t plagiarized.

I always kept my guard up with Mr. O. I did not reveal my last name and used my dating email address. After finding sections of his email on romance scams, I blocked his number on my cell phone and set up a filter so I didn’t have to see any future correspondence.

If you enjoyed this post or past ones, please subscribe to this blog. For those who like to read everything on a kindle, Dating, Sex, and Life in your 60s is now available as a kindle blog.

Until next week, happy dating or not dating!

4 thoughts on “A Bad Bagel on Coffee Meets Bagel”